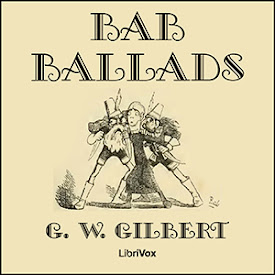 The Bab Ballads are a collection of light verse by W. S. Gilbert, illustrated with his own comic drawings. Gilbert wrote the Ballads before he became famous for his comic opera librettos with Arthur Sullivan. In writing the Bab Ballads, Gilbert developed his unique "topsy-turvy" style, where the humor was derived by setting up a ridiculous premise and working out its logical consequences, however absurd. The Ballads also reveal Gilbert's cynical and satirical approach to humor. They became famous on their own, as well as being a source for plot elements, characters and songs that Gilbert would recycle in the Gilbert and Sullivan operas. The Bab Ballads take their name from Gilbert's childhood nickname, and he later began to sign his illustrations "Bab".

Nothing else quite like the Ballads has ever been produced in the English language. They contain both satire and nonsense, as well as a great deal of utter absurdity. The Ballads were read aloud at private dinner-parties, public banquets and even in the House of Lords. Summary by Wikipedia and Phil Chenevert (2 hr 50 min)

Only A Dancing Girl

To A Little Maid—By A Policeman

The Bishop And The `Busman

Ferdinando And Elvira; Or, The Gentle Pieman

To My Bride—(Whoever She May Be)

The Folly Of Brown—By A General Agent

The Yarn Of The “Nancy Bell”

The Pantomime “Super” To His Mask

The Force Of Argument

The Ghost, The Gallant, The Gael, And The Goblin

The Phantom Curate. A Fable

At A Pantomime. By A Bilious One

The Story Of Prince Agib

The Three Kings Of Chickeraboo

To The Terrestrial Globe. By A Miserable Wretch