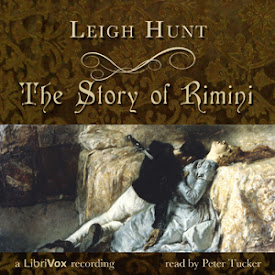 The Story of Rimini

A long poem telling the tragic story of Francesca da Rimini, the duped and adulterous bride, inspired by the character in Dante's Inferno. Published in 1816 and dedicated to Lord Byron, it is considered the pinnacle of Hunt's poetic achievements. Hunt, though having fine artistic sensibilities, was not placed among the first rank of lyric poets, many of whom he championed however. The Story of Rimini was written in prison, where he spent two years for slander of the Prince Regent, and is dramatically and vividly told, with much evocative scene-setting and careful portrayal of emotional conflicts. (Peter Tucker) (1 hr 25 min)