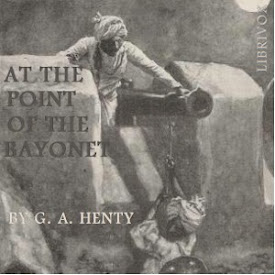 At the Point of the Bayonet: A Tale of the Mahratta War

The story of the war in which the power of the great Mahratta confederacy was broken ended in the firm establishment of the British Empire the Indian Peninsula. When the struggle began, the Mahrattas were masters of no small portion of India; their territory comprising the whole country between Bombay and Delhi, and stretching down from Rajputana to Allahabad; while in the south they were lords of the district of Cuttack, thereby separating Madras from Calcutta. The jealousies of the great Mahratta leaders, Holkar and Scindia, who were constantly at war with each other, or with the Peishwa at Poona, divided and weakened the nation and allowed the British to conquer, although at the cost of much blood, to free a large portion of India from a race that was a scourge--faithless, intriguing and crafty; cruel, and reckless of life. Henty paints the Mahrattas as cowardly tyrants and deserving of their ultimate downfall. - Summary by Lynne Thompson/ G. A. Henty (12 hr 53 min)

A Strange Bringing Up Part 1

A Strange Bringing Up Part 2

A Change In Affairs Part 1

A Change In Affairs Part 2

Down To Bombay Part 1

Down To Bombay Part 2

Down To Bombay Part 3

Down To Bombay Part 4

In The Company Service Part 1

In The Company Service Part 2

An Act Of Treachery Part 1

An Act Of Treachery Part 2

A Mission By Sea Part 1

A Mission By Sea Part 2

The Defence Of Johore Part 1

The Defence Of Johore Part 2

The Break Up Of The Monsoon Part 1

The Break Up Of The Monsoon Part 2

Excellent Story. The Last reader spoils it a bit.

Brilliant Story from the British point of view when they are trying to conquer another land... How they try to justify it, it is hilarious. But still a wonderful tale. Ruined a bit by the last reader. Also the ending I thought was abrupt.

A LOT OF HISTORY

A mpst informative examination of the wars in question. Most of the readers did a good job, but Esrher needs to understand that there is much more to good reading than breakneck speeding.

Suffers from some of the readers

Standard Henty fare; well written, informative, British at it's best, Love it!!! Some of the book suffers due to readers being unable to pronounce Indian names and words (I laughed when the 'J's became Hispanic sounding 'H's - like In the Raha of Hohoray). Finally, will somebody please instruct Esther Ben Simonides how to read for public consumption?? I'm sure she means well, ALL the volunteers do, but she rushes through her chapters as though she's in a race or, more likely, rushing to get her homework finished!! Then when she slows down for a voice characterisation of dialogue, these BOOM out five times louder than the rest of the text (I think it's to make sure you're awake!!). Good effort Esther, but please slow down so we can catch up and try to stay at an even distance from the microphone so we don't keep reaching for the volume knob!!

Interesting to hear the story from British view. Esther reads so quickly that it is very hard to understand all the words. Hopefully, she will read these reviews and enjoy the story more. I enjoy her voices and she has a pleasant voice. Just slow down and let the hearer sink into the story rather than fight the diction.

Like all the other Henty stories I have listened to on Librivox, it illuminates a bit of history I don't know much about and does so in an entertaining way. Well worth a listen.

A fantastic book thank you to all the readers. The last reader needs pace herself as speed reading is never easy to listen to.

though a little tedious at times, overall very interesting to hear about the circumstances surrounding the imperialization of India.