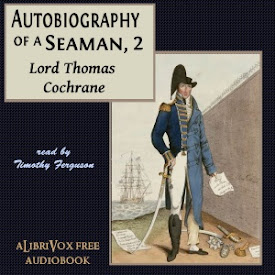 Autobiography of a Seaman, Vol. 2

This second volume of the biography of Lord Cochrane deals with his fall from grace, imprisonment for debt, loss of honours, and attempts to clear his name. It has had a marked influence on naval fiction, most obviously on some of the novels by Patrick O'Brian. - Summary by Timothy Ferguson (13 hr 52 min)

Chapter 24 - A Naval Study For All Time

Chapter 27 - Conduct of the Court-Martial

Chapter 28 - The Vote of Thanks

Chapter 30 - My Plans For Attacking the French Coast Refused, And Myself Supers…

Chapter 31 - Visit To The Admiralty Court At Malta

Chapter 32 - Naval legislation Half A Century Ago

Chapter 35 - Naval and Other Discussions in Parliament

much better than the reviews would have you believe

Firstly, a great reading of a hard to find volume. Secondly, I perfectly understand those who being familiar with the first volume find the early chapters repetitive. About we must take this for what it is. It's a first hand history which sheds light on the events of several subsequent centuries. The later chapters speak of the deplorable conditions of British seamen, from which one may deduce the similarly deplorable state of everyone else in Britain. Lord Cochrane does us the service of documenting the propensity of Jolly Jack Tar to defect to the USN for want of humane treatment at the hands of The Crown. More than anything, this book has crystallised the idea that the USA is the true birthplace of our assumed "British freedoms". The chapters dealing with naval abuses are staggering. Lord Cochrane is rightly a hero. This book, while extremely put-downable

Whereas the first volume is full of interesting details about the Naval career of Lord Cochrane, volume 2 is not. In this second volume, Cochrane seeks to clear him name of the accusations leveled against him in various trials. He presents the same information over and over again. The details of the Battle of Aix Roads was interesting the first time around, but we don't need a compendium of materials all supporting his perspective. Even worse is the incessant discussion of the color of his guest's undercoat, which was apparently a key piece of evidence against him in his fraud trial. Tedious. Timothy Ferguson does an excellent reading though, which is all he more impressive because of the material.

Famously read by Mr Furguson. Not quite as captivating as Vol 1, but I am glad It was read by such a capable and entertaining fellow.