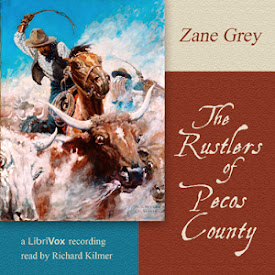 The Rustlers of Pecos County

The town of Linrock, located in Pecos County in south Texas, has fallen under the control of a gang of rustlers. Two Texas Lone Star Rangers are sent to Linrock to clean up the town .They soon fall in love with two girls who may be related to the leader of the gang of rustlers.There seems to be no good choice for these two dedicated lawmen. (Summary by Richard Kilmer) (7 hr 46 min)

its the same i mean the same as his book. THE LONG STAR RANGER

the long star ranger. in a different cover

This is another of the great books by Zane Gray. ,it remend of Sun set pass,which was a simular plot

It is the same exact writing as his book Lone Star Ranger.

Several chapters in the book are EXACTLY the same as his book Lone Star Ranger. It is Really puzzling.

The comment that this was the same plot as "THE LONE STAR RANGER" was certainly true. Nevertheless, it is an enjoyable tale. Kilmer is a joy to hear.

Great voice. If he watched punctuation he would be a great reader. I apologize for being critical of someone who has done me the favor of volunteering.

I like this man's voice. Reminds me of an old uncle who read like Mr Kilmer. I wish he would have been able to read more books