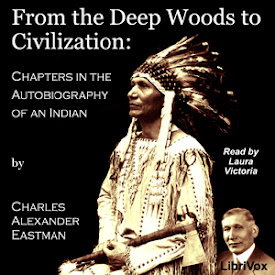 From the Deep Woods to Civilization: Chapters in the Autobiography of an Indian

From the Deep Woods to Civilization is the sequel to Indian Boyhood. Charles Eastman (Ohiyesa) gives his account of what it was like to transition from the ways of his Indian life to that of the white man. His father, long thought dead, had converted to Christianity and wished the same for his son as well as receiving education in the white man's school. At the age of 15, Ohiyesa must learn to balance the old familiar life of the American Indian with that of the new in the world of the white man, one of his first acts being the cutting of his long hair and attending school. It also chronicles his life of college to becoming a doctor at Pine Ridge in South Dakota, his marriage to Elaine Goodale, and his involvement in politics, the YMCA, and Boy Scouts of America. ( Laura Victoria) (3 hr 47 min)

On the White Man's Trail

College Life in the West

College Life in the East

A Doctor Among the Indians

War with the Politicians

Civilization as Preached and Practised

At the Nation's Capital

Back to the Woods

The Soul of the White Man

An eye opening look into the plight of the Native American, told from first hand accounts of the author. If you want to take an honest look into a dark time in this nation's history, a view uncluttered with bias and prejudice, then you will find this book most fulfilling and enlightening.

Laura is a great reader. I enjoyed this book greatly

This is one of the most important books I've encountered. It sheds light on a little-known culture, but even more important, it helps the reader learn how to go about beginning to try to understand people from a different culture; a skill that very few people seem to possess today. This autobiography may even shed light on the origin of what many philosophers such as Aldous Huxley, George Orwell (née Eric Blair), and Daniel Quinn seem to consider as the current monotonically downward spiral of North American culture into oblivion. The author was born in 01858 a native North American of the Sioux Nation of the clan of the Wah'petons or "Dwellers among the Leaves." Then living in the southern region of what is now known as Manitoba, the book opens with the 15 year-old author reflecting: "From childhood I was consciously trained to be a man; that was, after all, the basic thing; but after this I was trained to be a warrior and a hunter, and not to care for money or possessions, but TO BE IN THE BROADEST SENSE A PUBLIC SERVANT." (emphasis added by reviewer) The author's father---who had been thought by his tribe to have been killed by European colonists in The Sioux Wars fought between 01854 and 01890---had actually been a prisoner of war for years. As such, he had been converted by missionaries from his native religion (that honored the "Great Mystery"; author's quotes) to Christianity. In the autumn of his fifteenth year of life the author's father returned to the tribe to ask his son to come live in the European colonists' "civilization" in Flandreau, South Dakota with him. After deep introspection, the author complied with his father's wishes and ultimately completed a European-American style formal education and became a New England physician. "Eastman first attended Beloit College and Knox colleges; he graduated from Dartmouth College in 1887. He went on to medical school at Boston University, where he graduated in 1889 and was among the first Native Americans to be certified as a European-style doctor." [wikipedia] Having been a member of Sioux culture for his first 15 years and afterward having been a member of European-American culture for the rest of his life, Dr. Eastman was in a rare position to be able to write from first-hand experience about the positive and negative values of both cultures. This is a "must-read" book. The LibriVox reader has a wonderful voice which enhances the value of this audiobook and makes the 3+ hour listening experience fly by. Great for a listening on a long drive.

I like this writer a lot. I read another of his and plan to check out his other works. This work is mainly a look at the white mans world from his perspective of an Indian. It strikes me as fair, measured and compassionate.

The most enlightening look into how western expansion effected Native Americans. A view from their eyes as to what was happening to their world. I returned to re-listen to chapters. An important read.

Wonderful story in the author's own words

The other five star reviews have said it all for me. Do not miss any of Laura Caldewll’s (aka Laura Victoria) narrations!

Wonderful story in the author's own words.

The other five star ratings have said it all for me! Don't miss any of Laura Caldwell's (aka Laura Victoria) books!

This book is a must! Great reader. Well written. Opens eyes to the changes native Americans went through.