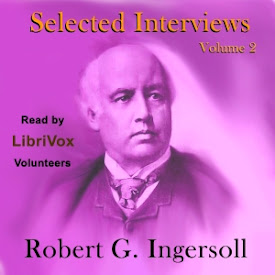 A controversial lecturer and famous orator of the mid 1800's, Ingersoll railed against the absurdities of the Bible and cruelties of orthodox Christianity, tirelessly supported the arts, education, science, women’s rights, abolition, home, family, children, and human liberty, whose creed was: “Happiness is the only good, Reason the only torch, Justice the only worship, Humanity the only religion, and Love the only priest.” He was often attacked from the pulpit and in the press. Here are 30 more published interviews (from among hundreds), in which Ingersoll spoke extemporaneously, bitingly, sometimes hilariously, on a wide range of topics, with newspaper reporters of the day. (Compiled from The Works Of Robert G. Ingersoll, Volume 8, Dresden Edition, Pub. 1900. Summary by Michele Fry

Proof-listening was done by both readers in each duet. (6 hr 41 min)

Guiteau and his Crime

Trial of the Chicago Anarchists

The Stage and the Pulpit

Society and its Criminals

The Church and the Stage

A Visit To Shaw's Garden

Slavery was of course evil, guess what sir, the Catholic Church also had its abolitionists. Yeah, buddy. 1 Star ONLY for the reading.

can’t believe you guys have this stuff !

This is priceless hard to find stuff TY so much !