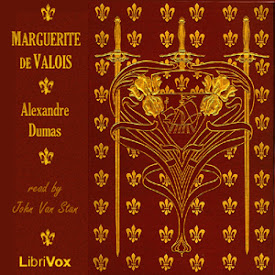 The Queen of Navarre's Bedchamber

Of the Louvre in Particular, and of Virtue in General

Death, Mass, or the Bastille

The Hawthorn of the Cemetery of the Innocents

The Abode of Maitre Rene, Perfumer to the Queen Mother

"Sire, You Shall be King"

The Rue Tizon and the Rue Cloche Percee

The Hand of God

The Letter from Rome

The Gratitude of King Charles IX

A Night of Kings

The Return to the Louvre

The Girdle of the Queen Mother

The Inn of la Belle Etoile

Two Heads for One Crown

The Treatise on Hunting

The Pavilion of Francois I

The Forest of Vincennes

The Figure of Wax

The Torture of the Boot

The Sweat of Blood

The Donjon of the Prison of Vincennes

The King is Dead! Long Love the King!

I just love this story! There's just so much blood and intrigue. Dumas makes Catherine d'Medici the scariest villain ever penned. Plus, there are sword fights, secret passages, traitorous plots, illicit romance, plenty of poison, trap doors that plunge their victims to deadly demise, torture, beheadings, all out massacre, fancy dresses, and horses! John Van Stan does a great job with the narration. Just don't listen before you try to sleep!

Dumas does it again! this book was phenomenal; i couldn’t stop listening. in parts it had me breaking out in a cold sweat from genuine anxiety for the characters - in particular, de Mouy’s escape during the attempted arrest of the King of Navarre had me breathless. nevertheless, some of the characters fall flat to me - la Mole is never really anything other than in love with the queen, and never shows any concern for his difficulties in being forced to convert. his whole being revolves around being in love. Margot was a great strong character - i liked that she was clearly not in love with la Mole at first, but said she was to ensure his devotion, but falls for him at last. Coconnas and Henry de Navarre are my firm favourites - the way Coconnas conducted himself during his imprisonments, torture, and beheadings are sublime and read in Dumas’ characteristic way of marrying humorous prose with very serious situations. the epilogue ruined the tone of the book completely; i was in total emotional ruin and then the epilogue (complete with the dreaded ‘one year later’, arrives to kill de Mouy and Charlotte for no reason whatsoever other than to bum Henry out; there’s no narrative tension and Charlotte is another tragic woman killed to further a mans destiny. Margot isn’t even there! it didn’t even feel like the same book) the epilogue ruined it and for that reason i don’t give it 4 stars, but the rest of the book is truly excellent and i highly recommend it to anyone. Catherine de Medici is a criminal mastermind to the highest degree and remains level with Cardinal Richelieu as my favourite of Dumas’ villains. i loved it!

you can adjust the speed in which he reads, first off. Second, Alexander wrote with such vivid images and the reader's voice was perfect for most of it, that combined together, I was at the edge of my seat through most. The scene with the king and Renee was written with such care, you would have thought you were in the story it's self. No offense to the reader but he's not perfect at doing a girl's voice. Over all I will definitely be suggesting it to friends.

This book had me in near constant suspense the entire time, due to the constant intrigues and plot twists. There were so many interesting characters, I could not decide whose stories I enjoyed more. I have no idea why it is not a more popular text. Wonderfully written!

too fast for me

The reader read too fast so I stopped in the first chapter. There is so much detail that is lost with a fast read. I will switch to a different version and recommend others do as well.

too fast? can slow down reader

If reader is too fast (or too slow), you can change the speed in upper right corner of App. I thought this guys voice sounds great slowed down a bit!

Very exciting story, packed with intrigue. Reading is pretty good. Too fast, as noted, but after the first chapter's gallop he slows down enough that you can follow.

dumas great as always... I read the series in reverse order but it still makes sense!! van Stan.. good read