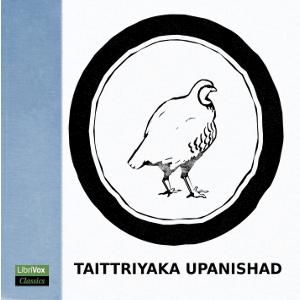 Taittiriya is a Sanskrit word that means "from Tittiri". The root of this name has been interpreted in two ways: "from Vedic sage Tittiri" or a collection of verses from mythical students who became Tittiris (birds, partridges) in order to gain knowledge.

This Upanishad is divided into three sections called Vallis: Siksha (Pronunciation /Instruction) Valli , Ananda (bliss of Brahman) Valli , and Bhrigu (son of Varuna, the god of all water elements) Valli.

The chronology of Taittriyaka Upanishad is unclear; it is ancient and generally placed around 1st half of 1st millennium BCE.

The 11 principal Upanishads to which Sankara appeals in his great commentary on the Vedanta-Surtras are: Chandogya, Talavakara or Kena, Aitareya, Kaushitaki, Vajasaneyi or Isha, Katha, Mundaka, Taittirtiyaka or Taittiriya, Brihadaranyaka, Svetasvatara, and Prasna. They are also called the 11 classical Upanishads or the fundamental Upanishads of the Vedanta Philosophy. Apart from these, Maitrayana-Brahmana-Upanishad is also considered as an important Upanishad.

The Upanishadic literature is not a religious scripture and is free from dogma and doctrines. It is not a part of any religion but is a philosophy for all times and for all. German philosopher Arthur Schopenhauer, impressed by the Upanishads, called the texts "the production of the highest human wisdom". Summary by Jothi (0 hr 48 min)

First Valli or the chapter on Siksha (pronounciation)

Second Valli or the chapter on Ananda (bliss)

Third Valli or the chapter on Bhrigu (son of Varuna)

excellent. clear reading. I was taught to chant this. nice to know the meanings. Thanks!