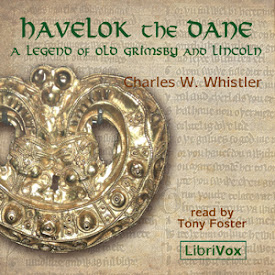 Havelok the Dane: A Legend of Old Grimsby and Lincoln

Troy, Athens, Rome... each has its founding legend. So too does the Lincolnshire town of Grimsby, once the largest fishing port in the world.

Havelok the Dane probably derives from a folk-tale, orally passed down before assuming written form - first in Anglo-Norman French, later in Middle English verse (c. 1280-1300). It tells of the rescue of the Danish prince from a wicked regent, who has tried to procure Havelok's murder. Grim the fisher, the appointed hit-man, thwarts the plan by spiriting the lad to England, where Grim settles with his family on the coast, adopting Havelok as his foster-son and naming the new community after himself.

C.W. Whistler's clever adaptation of the tale (published in 1899) draws on the various medieval sources. The English poem is particularly suited to 'novelisation'. It abounds in homely detail, and the hero's progress from half-dead waif to the triumphant fulfillment of his strength and kingly destiny makes a satisfying arc for the development of plot and character. At the same time, the legend's origins in oral performance are suggested through the choice of a first-person narrator, namely Grim's sober-sided son Radbard, whose plain-spoken account conveys something of the older saga tradition.

Our reader, the gifted Tony Foster, has worked and travelled in Scandinavia. His subtly-inflected narration brings a truly Nordic flavour to this re-creation of life in sixth-century Britain.

Since Charles Whistler published his novel, both Grimsby and its local heroes have been celebrated from time to time - by Elton John in his album Caribou (1974) and recently in a folk rock musical by local band Merlin's Keep (2014). (Introductory summary by Martin Geeson) (8 hr 56 min)

CHAPTER I - GRIM THE FISHER AND HIS SONS

CHAPTER IV - ACROSS THE SWAN'S PATH

CHAPTER XI - THE COMING OF THE PRINCESS

CHAPTER XIV - THE CRAFT OF ALSI THE KING

CHAPTER XV - THE FORTUNE OF CURAN THE PORTER

CHAPTER XIX - THE LAST OF GRIFFIN OF WALES

CHAPTER XX - THE OWNING OF THE HEIR

CHAPTER XXI - THE TOKEN OF SACK AND ANCHOR

Professional-level narration. The story itself is one of the best I have heard. You can tell by the details given that it was a man who knew seafaring and fighting who told it. Certain things can't be faked.

Having enjoyed the reader's earlier recordings, I made a priority of downloading this. In my view, Tony Foster has surpassed himself and has given us a consummate version of an historical adventure story. Some audiobooks can be credited with re-creating the world occupied by their characters - in this case, early medieval Britain - and this is one. Listen and be transported back in time.

one of the best audiobooks I have listened to

Excellent reader for this story! Would recommend.

This is quite a legend brought to life by Tony Foster. The action never stops!

One of the best books and certainly the best reader on here.

Great listen from an ancient text