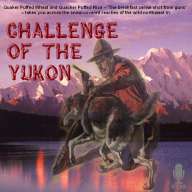 Challenge of the Yukon - Single Episodes

CHALLENGE OF THE YUKON

Challenge of the Yukon was a long-running radio series that began on Detroit's station WXYZ (as had The Lone Ranger and The Green Hornet), and an example of a Northern genre story. The series was first heard on February 3, 1938. The program was an adventure series about Sergeant William Preston of the Northwest Mounted Police and his lead sled dog, Yukon King, as they fought evildoers in the Northern wilderness during the Gold Rush of the 1890s. Preston, according to radio historian Jim Harmon, first joined the Mounties to capture his father's killer, and when he was successful he was promoted to Sergeant. Preston worked under the command of Inspector Conrad, and in the early years was often assisted by a French-Canadian guide named Pierre. Preston's staunchest ally, who was arguably the true star of the show and indeed often did more work than he did, was the brave Alaskan husky, Yukon King. Typical plots involved the pair helping injured trappers, tracking down smugglers, or saving cabin dwellers from wolverines. Sgt. Preston's faithful steed was Rex, used primarily in the summer months, but generally Yukon King and his dog team were the key mode of transportation (as signalled by Preston's cry of "On, King! On, you huskies!." There is some confusion regarding King's actual breed. The producers seemed to use malamute and husky interchangeably. At least once, Preston answered "malamute" to the question from another character. In the early radio shows, the cry of "On, you huskies!" would alternate with "On, you malamutes" from show to show. Von Reznicek's Donna Diana Overture was the pulsing theme music, and the episodes ended with the official pronouncement, Well, King, this case is closed. Following the success of The Lone Ranger and The Green Hornet, George W. Trendle, the station owner, asked for a similar adventure show, but with a dog as the hero. According to WXYZ staffer Dick Osgood, in his history of the station, Trendle insisted that it not be "a dog like Lassie because.. this must be an action story. It had to be a working dog." Writer Tom Dougall, who had been influenced by the poems of Robert W. Service, naturally chose a Husky. The dog was originally called Mogo, but after criticism by Trendle, Dougall re-christened the canine King. Dougall likewise created Sgt. Preston and the French-Canadian guide. Fran Striker, who wrote for The Lone Ranger, also contributed scripts. However, Trendle's criticism of Dougall may have had another reason behind it. Shortly before the two Trendle series aired ( The Lone Ranger and Challenge of the Yukon), popular author Zane Grey had a book in circulation (Lone Star Ranger) about a Texas Ranger like The Lone Ranger and a comic book series in circulation (King of the Royal Mounted) about the adventures of Sgt. King, a Royal Canadian Mounted Policeman like Sgt. Preston. It could be that Trendle borrowed both ideas from Grey's work and wanted to retain the name "King" as a tribute to Grey, who died after a long illness one year following the first airing of Challenge of the Yukon. Challenge of the Yukon began as a 15-minute serial, airing locally from 1938 until May 28, 1947. Shortly thereafter, the program acquired a sponsor, Quaker Oats, and the series, in a half-hour format, moved to the networks. The program aired on ABC from June 12, 1947 to December 30, 1949. It was then heard on The Mutual Broadcasting System from January 2, 1950 through the final broadcast on June 9, 1955. The title changed from Challenge of the Yukon to Sergeant Preston of the Yukon in November 1951, and remained under that name through the end of the series and into television.

Till a Man's Proved Dead

A Footprint in Leather

Caught by a Button

The Last Days of a Freight Line

The Ring on His Finger

A Date to Remember

Return to the Crime

Self Defense or Murder

By Hook or by Crook

No Escape for a Murderer

Revenge in the Yukon

Cabin on the Trail

As a Man Thinketh

A Pack of Bacon

A Joke Led to the Gallows

The Man from Missouri

Design for Murder aka Killing Sullivan

The Duke Bows to a King

Of Dogs and Horses

The Plan That Failed

King Breaks the Wheel of Fortune

A Frame-Up That Failed

Death and the Flickering Eye

Eyes for the Blind

Case History of a Mountie

One Went to the Gallows

How Connelly Paid the Law

Trap for a Mountie

Murder on the Trail

Blizzard in the Yukon

Back Door of the Mountain

Her Weight in Gold

Spawn of the North

God of the Mountain

A Boy and a Dog

Jane Gets Her Man

The Return of Pete Hunt

How Preston Got King

The Pup That Ate Too Much

Trap in the Mountains

Thanksgiving in the Wilderness

The Man Who Limped

A Question of Ethics

The Hermit of Nugget Hill

The Story of Big John

The Man in the Fur Cap

The Revenge of Steve Carlton

Clue to a Killer

King Gets His Man

Tago, the Half Breed

The Loyalty of Chief

Witness for the Crown

Shots in the Dark

Mine of Good Hope

Samaritan of the Trail

The Call of Duty

The Man with the Red Hair

Death on the Trail

Mutiny on the Penguin

The Trap in Cabin Four

Escape to the North

Faith in a Mountie

The Emerald in the Nugget

The Man with the Red Coat

King Proves His Worth

Mystery in the Cave

The Trail of Grizzly Grayson

The Dog with the Gold Tooth

The Meal that Convicted

The Black and White Pup

Letters to a Killer

The Trail of the Werewolf

The Luck of the Newtons

Fire in the Sky

Escape to the North

The Case of the Hard-Hearted Hermit

Death and the Lucky Seven

The Skull in the Stone

The Case of the Turncoat Mountie

The Case of the Frightened Child

The Case of the Canyon Holdup

The Case of the Yellow Ribbon

A Boy and His Dog

The Case of the Beautiful Swindler

The Case of the Crown Fire

Trickery in the River

The Case of the Kind Hearted Killer

The Case of the Unwilling Guardian

The Case of the Friendly Enemies

The Case of the Detective Who Liked Excitement

The Boy Who Feared Dogs

The Case of the Wishbone

Fire on the Trail

King and the Baxter Gang

The Case of the River Pirates

The Case of the Sourdough's Dog

The Scent of Blood

Murder on the Mountain

Rescue in the Forest

The Miser and the Mob

The Senator Finds a Treasure

The Return of Tom Becket

The Battle at Bradley's

No Epitaph for Tombstone

The Trap That Failed

The Man Who Fled

Mystery of the Ridge

The Angel of Death

The Bag of Gold

Race of the River Boats

A Change of Mind

The Gold Behind the Waterfall

The Sack of Sand

Out of the Night

Heart of a Killer

A Call to Action

Whistling in the Dark

The Clue of the Silver Pup

Death Waits on the River

The Man in the Canyon

The King of Keeno Creek

Secret of the Closed Room

Murder at the Flood

The Man Who Feared Dogs

The Scent of Death

Fire in the Forest

The Trail of Gold

King Proves His Worth

Sins of the Father

Arms and the Girl

The Return of Red Gruver

Man on the Trail

The Streets Are Guarded

Bread upon the Waters

The Case That Was Not Closed

Laurie and the New Recruits

The Sun and Raven

The Boy from Seattle

Out of the Past

Murder on the Mountain

I love the Yukon Territory and have been to some of the towns depicted that are along Hwy 1. Someday we'll take Hwy 2 and see some others! Having been in the region I can picture the scenes described, the desolation, the beauty, and vast emptiness. Robert Service is also one of my favorites.

This is a hidden gem.

I really enjoy this show. I remember listening to it when I was a kid. (I'm 55 yrs old) The portrayal of the cold wintery scenes are very well done. I give this show 5 stars!

It's hard for me to believe that no one, to date, has written a review about this mainstay of young people's (and many adults') radio listening. Even today, at age 64, I find myself chilled at the descriptions of the sub-zero temperatures that this low-paid but gallant hero and his wonder dog King faced during the Klondike gold rush in the Canadian Yukon Territory late in the 19th Century. Also, no mention is made here of the man who portrayed Preston during much of its long run which went well beyond the coming of television. He was Paul Sutton who in real life looked nothing like the man we would imagine our hero to be. Sutton usually played heavies in budget movies and during the mid-50s tried to get into Michigan politics. He's not getting the credit he deserves. When I listened to the show during the late 1940s and early '50s, the sponsor was Quaker Puffed Wheat and Quaker Puffed Rice — announced as "the only cereals shot from guns" followed by simulated gunfire. I've read that the slogan came from an ad man who was touring the Quaker plant. He observed that these cereals were cooked in a tank that resembled a cannon (exploding like popcorn?), hence the claim and the picture of a cannon shooting out cereal on the cover of each Puffed Wheat and Puffed Rick box. The gun on the box has disappeared, but the products taste the same, just as this vintage program today can still entertain anyone with an imagination and a sense of adventure. JohnMc

I would like to say, first and foremost , I found this site about 8 years ago,, and I listen every single night of the week. I have had numerous back surgeries, and so makes a lot of time for me to enjoy all of your material. I could go through the pages all day, and still not find everything you have to offer. Thank you so much for the endless hours of entertainment.. It brings me back in time, and makes me appreciate the old time shows all the more. Very Sincerely Yours:: Russ Horcher,,, Cambridge Mn.

The series DOES deserve more credit. Coming out of Detroit radio with cast similar to their other bigger hits, Lone Ranger and Green Hornet, it was vastly underrated. The true to life setting and special effects as well as a "hero" huskie and good scripts make this worth the time to listen. Of the old-time-radio shows, this belongs near the top.

If you haven't listened to this series yet and the wonder where you might start, start with Swill O' Gunpowder." It's an engaging thriller with a hilarious twist and a most enjoyable 15 minutes of old time radio listening.

FYI: Replaced files on this page from the Version 4 Release. For the full OTRR Release, see the OTRR Certified page: <a href="https://archive.org/details/OTRR_Certified_Challenge_of_the_Yukon" rel="nofollow">OTRR Challenge of the Yukon</a> - Old Time Radio Researchers Group