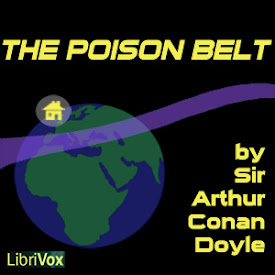 Three years after the events that took place in The Lost World ( http://librivox.org/the-lost-world-by-sir-arthur-conan-doyle/ ), Professor Challenger urgently summons his fellow explorers (Professor Summerlee, Lord John Roxton, and reporter E.D. Malone) to a meeting. Oddly, he requires each to bring an oxygen cylinder with him.

What he soon informs them is that from astronomical data and just-received telegraphs of strange accidents on the other side of the world, he has deduced that the Earth is starting to move through a region of space containing something poisonous to humankind.

Shutting themselves tightly up in Challenger's house, they start to consider what may be done. But as their countrymen start to drop, will their oxygen last long enough to determine and implement a solution? (Summary by Mark Smith) (3 hr 18 min)

THE BLURRING OF LINES

THE TIDE OF DEATH

A DIARY OF THE DYING

Beautifully read by Mark F. Smith of Simpsonville, South Carolina. The subject matter might seem somewhat preposterous to modern thinking and the language a little odd, but this is a fun read / listen. I really enjoyed this short apocalyptic tale and also the resurrection of the superb characters first scribed in 'The Lost World'. Professor Challenger's bombastic nature once again comes the fore. Excellent.

Most readers associate Sir Arthur Conan Doyle with his most famous creation, the detective Sherlock Holmes. This book is totally different. It explores an incident in which Earth passes through a band of poison gas which causes the death of all humanity except for the characters who are the focus of the story. The tale is imaginative and reflects Doyle's interest in space and catastrophic events. The story is narrated by Mark Smith of Simpsonville, South Carolina who does a great job. Highly recommended.

An interesting, if not understated, second book in the Challenger series, which follows on from ACD's masterpiece - The Lost World. This is not so much an adventure into the physical world as depicted in The Lost World, but is instead an adventure made by our audacious heroes into surviving, understanding and responding to a mysterious existential threat from space. Chapeau to Mark Smith; one of the best narrators around. So, now off to find the third book in the series, Land in the Mist.

Just as 911 sobered us for awhile and caused us to consider less petty thoughts...this book presents us with a “global 911”...with the scope of The Great Flood...and asks us to do likewise. It’s a clever story idea and is well worth a listen.

Fun But Not Fulfilling

Fun but not fulfilling. The deep reflective purpose eluded to in the last paragraph was missing from the story. M.F. Smith was excellent as usual. 3 Stars,however, is all I can muster for this failed attempt by Sir Conan Doyle to infuse meaning into materialism.

Familiar cast of characters experience an extraordinary and sobering scenario in this imaginative tale... plot trajectory is unfortunately too acute to allow for an unanticipated twist.. but the didactic denumont suffices. Exemplary reading by Mr Smith, as usual. Thank you, sir.

Listened to this after The Lost World but unfortunatly didn't like this as much. Feels a bit flat and the danger never felt 'real'. It's okay but nothing more. Speaker is good and the same for the whole book