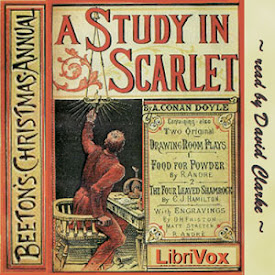 A Study In Scarlet (Version 6)

A Study in Scarlet is a detective mystery novel written by Sir Arthur Conan Doyle, introducing his new characters, "consulting detective" Sherlock Holmes and his friend and chronicler, Dr. John Watson, who later became two of the most famous characters in literature.

Conan Doyle wrote the story in 1886, and it was published the following year. The book's title derives from a speech given by Holmes to Doctor Watson on the nature of his work, in which he describes the story's murder investigation as his "study in scarlet": "There's the scarlet thread of murder running through the colourless skein of life, and our duty is to unravel it, and isolate it, and expose every inch of it." (A "study" is a preliminary drawing, sketch or painting done in preparation for a finished piece.) - Summary by David Clarke (4 hr 37 min)

Our Advertisement Brings A Visitor

Light In the Darkness

On The Great Alkali Plain

John Ferrier Talks With the Prophet

A Flight For Life

A Continuation of the Reminiscences of John Watson MD

I selected this book because it was read by David Clarke. I was introduced to him when listening to “The Count of Montie Christo”. This story is obviously a good one, as all who enjoy Sherlock Holms will acknowledge, but Mr Clarke’s delivery makes a great story that much more pleasant!

Ahead of its Time - Clarke is Amazing

My favorite living author is Neil Gaiman. I think I remember Gaiman, in an interview, refer to Sir Arthur Conan Doyle as his biggest influence as a writer and story teller. Gaiman’s style is so close to Doyle’s that I wouldn’t be surprised to learn that Gaiman is the actual reincarnation of Sir Arthur Conan Doyle. Maybe it would be more accurate to say that Doyle was at least 120 years ahead of his time. This book holds up to today’s standards in every possible way, and exceeds them. Clarke’s performance of the text is absolutely wonderful. I’m going to listen to every book that Clarke has recorded for LibriVox, starting with all of the Sherlock Holmes stories, in the order that they were written.

His voice is just like one of a voice actor. Recommend to listen this.

A seis Y in scarlet

👍 The story has several unexpected twists and turns. Quite a classic Sherlock Holmes. The narrator David Clarke is wonderful. Distinct voices for each character which are not over-done. His own voice as a narrator is also quite pleasant.

A gripping tale, well read! One of the best narrators I've heard and one I will be following.

A Study In Excellence

David Clarke vs. all other versions is like Sherlock Holmes vs. crime. He wins.

For anyone contemplating listening to A Study in Scarlet this is definitely the version to go for.