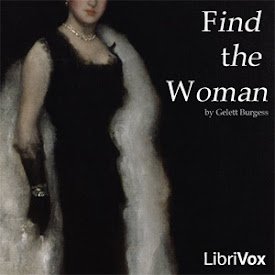 Who was Belle Charmion? If you really care to know, as John Fenton did, you must go with him on his quest, hither and yon over New York, into strange houses and through side streets at midnight, a shuttle in the secret loom of fate, weaving in and out through many-colored threads, until the pattern of the mystery is made clear. For the warp of his strange, adventurous career - love and beauty and diamonds. For the woof - some few cross currents of crime and misery. There, in brief, is the web of his drama. (From Prologue) (7 hr 28 min)

Chapter II - The House of the Fortune Teller

Chapter V - The Reporter of "The Item"

Chapter VI - The Suite at the Plaza

Listening to this book, I became convinced that the 80's movie After Hours- an up-all-night hapless-hero surrealistic adventure- was based on this book, despite the 70-year time difference. This book is a crazy mix of 1001 Arabian Nights (stories within stories), George Ade's Fables in Slang ("She turned her Liquid Orbs on him and had him to the Bad."), and After Hours. As you listen, you can be sure that whatever comes next is going to be neither probable nor even likely, but certainly exciting. Madcap thrills and contretemps are interspersed with, like a musical chorus, outlandish tales told by wildly various characters. An added attraction is the all-walks-of-life look at 1900-10's New York. Overall, very enjoyable. The reader was great. A little flat in tone, but I thought it highlighted the wry humor of the piece very well.

This novel was like a New York version of "Great Expectations." John Fenton, a young man of ready intelligence and little means, moves through multiple names, suits of clothes, and acquaintance with a variety of scoundrels of all levels of society, all in pursuit of a beautiful young woman whom he knows at first only from a photograph in a magazine. He becomes involved in the affairs, often nefarious, of a collection of characters who turn out to be strangely interrelated to each other and to his own unknown parentage. The story is entertaining, full of suspenseful twists, and some pathos as well. I personally also enjoyed the time- travelogue through New York City in 1911, having lived in an apartment exactly as described, with a second back entrance and a dumbwaiter shaft in the pantry. The narrator was very good. There was quite a bit of slang of the time that is no longer in use, and he managed it with clarity of meaning.

John Fenton (or is that his real name?) has had an unusual upbringing. He runs away twice from guardians who mistreat him. As an adult he has tried to live a good life, until one fateful day when the woman of his dreams, whom he has always felt drawn to, comes into his life. He is then tossed into a whirlwind of adventure, involving a gang of thieves, a bag of jewels, and people from all walks of life. The number of coincidences is a bit of a stretch, but the story is amusing. I found myself wondering what could possibly happen next! Reading was pretty good. All in all, a good tale. Enjoy!

Peculiar but interesting story of another time in NYC.

Some extreme racism. The reader does an excellent job. Short stories spin off the main character's quest to solve the basic mystery. I enjoyed this listen but it's not run of the mill or predictable.

I really wanted to hear this one but sadly I couldn't follow the story enough due to its delivery.

An amusing and fun book. Most of the readers did a good job of it. Thanks!