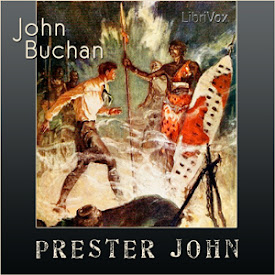 This classic adventure novel by the author of Greenmantle and The Thirty-Nine Steps relates the first-person exploits of young David Crawfurd before the age of twenty.

As a boy growing up on the coast of Scotland, minister's son Davie and two friends were pursued with murderous intent along the cliffs one night by John Laputa, a visiting black African preacher, whom they had witnessed performing un-Christian rites round a campfire on the beach. A few years later, when his father's death forces Davie to quit college and join the tribe of wandering Scots, our hero finds himself in South Africa, assistant shopkeeper in a seemingly sleepy back-veldt store. There he re-encounters Laputa, now charismatic leader of an incipient native uprising, secretly preaching the incendiary creed of "Africa for the Africans," and proclaiming himself heir to the mantle of Prester John, a legendary 15th-century Christian king of Ethiopia.

Can young Davie possibly penetrate the megalomaniac's mountain stronghold, foil the insurrection, prevent a massacre of white settlers, and make off with the rebels' war-chest of gold and diamonds? It's going to take some doing - and not a little derring-do! (7 hr 44 min)

I - The Man on the Kirkcaple Shore

IV - My Journey to the Winter-veld

V - Mr. Wardlaw Has a Premonition

VI - The Drums Beat at Sunset

VIII - I Fall in Again with the Reverend John Laputa

IX - The Store at Umvelos'

XI - The Cave of the Rooirand

XIII - The Drift of the Letaba

XIV - I Carry the Collar of Prester John

XV - Morning in the Berg

XVII - A Deal and Its Consequences

XX - My Last Sight of the Reverend John Laputa

XXI - I Climb the Crags a Second Time

XXII - A Great Peril and a Great Salvation

XXIII - My Uncle's Gift Is Many Times Multiplied

it was written a hundred years ago in pretty much a different world by our standards today.. you speak as if you are worried some person will pick a story like this up and make it his call to arms! why cant people trust other humans to read stories from the past without screaming from the mountains that its racist or sexist or what have you? give your fellow humans the benefit of doubt. we read these stories because they are fiction! they take us out of our own lives! most people dont treat fiction like its a history book! Please comment on the quality of the stories, the recording quality, the volunteers performance, or even a short statement saying i didnt like the story because it was to darn racist.. dont try to give everyone a "firm talking to" or dicourge listeners because you feel its racist.. trust me we all know what racism is and listening to a fictional book will not convert new white supremacists i promise you... now im off to download and listen because i wasn't going to until your post. jackass!

I read this book long ago, but brought to life by reader

I really enjoyed this book. At first I thought the reader was a trifle monotonous, but I got used to it to the point of actually looking for more of his reading. I think the reading does well by this book. The story is about a young man just beginning to make his way in the world. He stumbles upon hints of a native uprising and massacre, manages to get the news through to higher officials, and takes a hand in the proceedings himself. I think this book is one of Buchan's better novels, the best being of course Thirty-nine Steps. This one is not as contrived as Greenmantle or Standfast; the author keeps his character in the middle of the action without making him the only one to save the day, and that ad infinitum. He does help save the day, but more by wits than extraordinary luck. Recommended

Dickens has a character who claims that the place where most coincidences occur is London. However it appears that it pales to insignificance compared to South Africa. in reality it is quite a silly tale but well written and well read.

Story was pretty good. The reader could improve by adding expression/emotion & by not rushing through passages that need some pause.

The reader did a superb job to convey a great and historic adventure story.