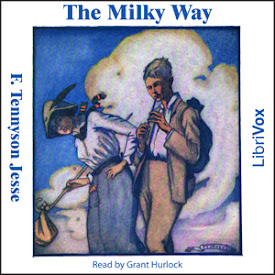 The Milky Way - F. Tennyson Jesse's first novel - began life as a 1913 magazine serial called The Adventures of Viv. In it, poor-but-plucky Cornish painter/model Vivian Lovel recounts events of her twenty-first year: en route from Penzance to London by steamer, she catches a baby dropped over the side of a sinking ship - and decides to keep it. Penniless, however, she "platonically" pairs up with pan-like fellow passenger Peter Whymperis, an actor and aspiring writer, and together they find work with a fifth-rate repertory troupe. Soon sacked, they nevertheless leave with money enough to buy milk for the baby. They then spend a night locked in a wax museum devoted to notorious murders and later trace a fugitive from justice to his lair. At a costume party, Viv rescues her beautiful friend Chloe from a cruel seducer, by taking her place (and his car). Viv then flits to Cornwall for a stint of modeling at an artists' colony. She's tempted to put down roots, but Peter appears, and they dance away as faun and nymph into the night. Back again in London, a publisher, whose home they invade, commissions Peter to write and Viv to illustrate a travel book about Provence, so they promptly decamp for France. While visiting the romantic locale of famous lovers Aucassin & Nicolete, Viv retells the fable so vividly to a filmmaker they meet that he decides to shoot the movie, with Aucassin played by Peter and Nicolete by - Chloe! Will Viv's faun succumb to the charms of her BFF? Or will her milky way have a honeyed end? The Milky Way is the only novel F. Tennyson Jesse completed before inadvertently touching a whirling airplane propeller with her painting/writing hand, the treatment of which left her with fewer fingers and a lifelong opiate addiction. Subsequently, she turned to crime - writing much about murders such as those that terrified Viv in the wax museum - and her later novels seem just a bit darker, harder, more impersonal and less ingenuous than this jeu d'esprit which was her first. (Introduction by Grant Hurlock) (11 hr 26 min)

13 - We Increase and Multiply

14 - A Flutter in Fleet Street

16 - What I Found Under the Pillow

18 - First Maurice and Then Edgar

20 - What I Told the Acanthus Leaf

29 - A Skeleton out of the Cupboard