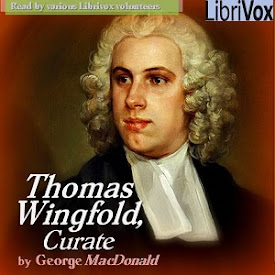 Republished in modern times as "The Curate's Awakening". A young man (Thomas Wingfold) "enters the church" through no real faith and only for want of something to do. After an encounter with a brash young atheist, he is thrown into an emotional, spiritual, and vocational crisis. Through his own doubts and through developing clarity gained from the counsel of a singular friend, he begins a slow journey toward faith, or - as he would put it - "a lovely hope." (Summary by John Schuurman & TriciaG)

Note that there are two versions of chapter 67. Enjoy one or both of the renderings. (18 hr 48 min)

06 - The Curate in the Churchyard

19 - The Conclusion of the Whole Matter

31 - The Curate Makes a Discovery

38 - Glaston and the Curate

69 - Bascombe and the Magistrate

Read by Thomas A. Copeland

73 - The Curate and the Doctor

77 - Passages from the Autobiography of the Wandering Jew

George McDonald always has a compelling story. For those seeking to know if there is a God and what he is like this book is in excellent journey to answer the question. There are many readers some sound as though they are professional and there are a few who were a little difficult to understand. I am very thankful for all the readers time and energy. Thank you Libravox for all that you do!

I love George McDonald but found this book hard to get through. The texts were long and too drawn out for me. The first reader was wonderful to listen to but then came some readers I could barely understand.

The story was thought provoking. As a Christian who has had many doubts, I appreciated the themes. I found myself wanting to love Christ more. I was uncomfortable with some characters' negative opinions of Leopolds Indian background, but it was unclear if those were meant only to be characters' opinions or if it represented any bias of the author. Certainly he was treated overall as a beloved character. at least you see that by the end. I also questioned why there was not a strong concern for the family of E. Trying not to give spoilers, though! But despite some flaws, I recommend this book. Some readers were hard to understand, but it was still worthwhile and I may read the book again on my own.

some is hard to listen to.

I'm thankful for the people who record these books. I love listening to George MacDonald. this is a challenging book but well worth it. I do have a hard time with the chapters read by the lady who always lifts her voice up at the end of every single phrase it maybe have to get the book and read those chapters. but I must be thankful anyway I'm sure it took a lot of time.

The story was amazing, and the first reader was fantastic! He really got into the characters voice and mannerisms I have not often heard in Librivox readers. Many of the other readers did well too, but two in particular were not good. One seemed like he had never read the text before, the other had a beautiful accent, but made it rather difficult to understand what was being said much of the time. Overall, great!

This is an excellent book, fit to refresh the spiritual vitality of any Christian who listens earnestly and takes to heart what is sometimes expressed in stuffy-sounding words but which carries every hearty ounce of intended meaning. Some of the readers did well, but unfortunately some of the readers were too difficult to listen to and I had to read through those chapters on the Gutenberg Project.

MacDonald tells an engrossing story, and he's not afraid to raise the ultimate question, 'Is there a god?' He's also not afraid to skip the easy answers and insist that his readers think! With all that, there's some Dickensian satire, a lurid murder, a runaway wife and a charming cow.

there are some long sermons and some flowery text and poetry. The story is simple and enjoyable but left me a little bit dissatisfied. most of the reading is solid but a few readers I found a little bit hard to follow. overall it's good and worth listening to.